Menu
You are here: Home / Work / Cooter Douglas – Everybody loves a little Cooter
Cooter Douglas started his comedy career by winning the Open Mic at The Comedy Cabana in 2007 and has been making people laugh ever since. He grew up in Charlotte, North Carolina (when it was a small town) and now lives in North Myrtle Beach, South Carolina   His comedy looks at life and current events from a very Southern perspective, with a twang. His life lessons come from being a bartender, rugby player, electrician, and his current job as an assistant weed eater for the city. He has developed his humor through his occupational deficiencies!   He has been on the radio as “The Mike Beach and Cooter Show” in the 90’s (Greenville, South Carolina), and still does commentaries and spots on several stations today. Catch him at a comedy club near you. Like the old saying goes “Everybody Loves a Little Cooter”. 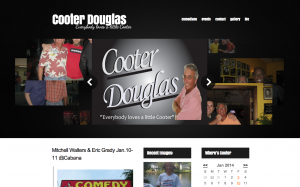 After moving back to my hometown of Charlotte, NC from the Atlanta, GA where I, Matthew Ross, worked for a fast paced global company, Yahoo.com and subsidiary NetRoadshow.com, I started Streamworks Media, LLC. Over the last 9 years, my company has evolved from a streaming media provider into a web solutions firm. We focus in streamlining our client’s communication needs.

My company currently acts a vendor to NetRoadshow.com and RetailRoadshow.com when their busy production schedule needs our help. We actively seek new clients for web related projects, as well as, eLearning development. We have been very successful at providing development, tutoring, and support for many clients in the Charlotte area.

I am the owner and lead designer / developer at Streamworks Media, LLC. I am also an Assistant Professor at The Art Institute of Charlotte, teaching part time in Web Design. I bring experience from past positions working at Yahoo!, Disney, & Wells Fargo to Streamworks Media, LLC. All of this experience helps to serve my clients with creative ideas and efficiency. I find great satisfaction in taking their challenges and creating solutions by using today's cutting edge web technologies. I am able to use my creative talents in media production, graphic design, web design, and development that were sharpened over a 15-year career in Information Technology to create viable business solutions today.

We'd love to hear about your upcoming project. Tell us by filling out our

Or give us a call at

Want to keep up with what's going on at Streamworks Media? Follow us across our Social Networks.